Friday 16th March was a big day for the choirs of Mount St Mary’s College in Spinkhill, as they travelled by coach to London to sing at a special Mass at Farm Street Church to celebrate the 175th anniversary of the founding of the college.

Mass was celebrated by the Fr Dominic Robinson SJ, Superior of the Mount Street Jesuit community.  Concelebrating were Fr Michael Beattie SJ, spiritual father residing at the College, Fr Tony Nye SJ, who was Headteacher at the Mount from 1968-76, and Fr James Caulfield, an alumnus of the Mount.

The many parents, staff, alumni and friends of the college in the congregation were treated to lovely performances of Bruckner’s Locus Iste and Mozart’s Ave Verum Corpus by the choir, and Philip Stopford’s Stabat Mater performed by sixth form soloist Scarlett Coughlan.
Fr Dominic congratulated the choirs saying, “you have performed some very difficult music absolutely beautifully, our grateful thanks to you all for all the hard work that went into the performance and to all those who have prepared you so well.”

In his homily Fr Tony Nye observed “the Mount St Mary’s choir have brought us the gift of singing, which helps us to worship and lifts us to God.  Your beautiful harmonies are not just an offering to God, but a good example of you all working together.”  He reminded the congregation of a motto which he had used in his education ministry: “you don’t go to God on your tod – you go together”.

After the service the staff, alumni and guests repaired to the Landsdowne Club for a celebratory dinner to mark the 175th anniversary.  Headteacher Dr Nicholas Cuddihy thanked everyone for attending and reviewed some of the many celebratory events of the anniversary year.

Fr Tony commented “it was a wonderful event - even though a minority of the children at the Mount are Catholic now, I was most impressed with the serious and reverent way they came up for a blessing at communion, and how they thanked me afterwards for the mass.  You can see that the strong Catholic and Ignatian ethos of our schools is forming generous and caring young people.” 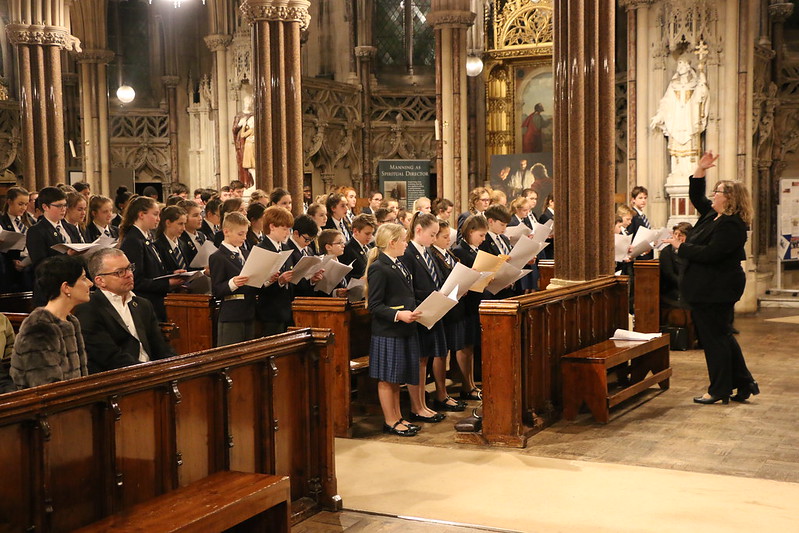