Feast for the senses at solemn dedication

Farm Street Church is accustomed to solemn and spectacular liturgies wherein all our senses are assailed with the glorious sights, sounds and smells of praise and thanksgiving.

Wednesday night’s liturgy of dedication of the new altar broke new ground in compelling awe and beauty.  In the words of the chief celebrant Bishop Nicholas Hudson, Farm Street Church is “beautified in a way which draws people to contemplate the mystery which is at its heart.”

The new stone altar is the final step in the restoration of the sanctuary.  The high altar by AWN Pugin was restored to its original splendour last year, making the 1990 fibreglass copy adorning the old front altar somewhat redundant.  “The old front altar was preventing the congregation from seeing Pugin’s masterpiece,” explained parish priest Fr Dominic Robinson SJ, “so we wanted to commission something simple yet beautiful to allow views through. The result is quite stunning.”

Master stone mason Paul Jakeman used marble from Carrara, Tuscany, which has been quarried since antiquity for material to give glory to God.  The pedestal moulding and gilding reflects that on the altar rails, and the front is garlanded with a stone vine. “It was an amazing ceremony,” he commented, “I have never carved an altar before so I really didn’t know what to expect. It was quite humbling.”

It was also the first time Bishop Hudson had dedicated a new altar.  The altar is a place of sacrifice and tradition requires that the relics of a martyr are deposited within its frame.  Bishop Hudson remembered especially the Jesuit saints martyred in London:
“On this day that we dedicate a new altar just yards from Tyburn, it’s good to unite ourselves to all those Jesuit priests who made the supreme sacrifice .. and ask that they unite themselves to the Eucharistic sacrifice every time we offer it on this altar: Campion, Southwell, Whitbread, Harcourt, Fenwick, Turner and Gavan.”

He then deposited the relic of a third century Roman martyr – St Tranquillinus – in an aperture beneath the table top which Mr Jakeman then sealed with mortar. A close observer will notice a bee on the carved vine above the relic repository.  The bee is a symbol of martyrdom.

The Rites of Dedication were carefully explained in the Order of Service.  The altar and congregation were first sprinkled with holy water, before the Liturgy of the Word.  Following the depositing of the relics, the altar was anointed at each corner and in the centre with chrism oil and then incensed both from a cauldron of coals on the altar itself and with two censers.

Members of the worshipping community at Farm Street were then invited to come forward to dress the altar. Yasko Kurahachi and Marta Albert spread the linen altar cloths.  Jane Lowe, Dame of the Holy Sepulchre, and Gabrielle Quinn placed the altar candles; and Dumle Kogbara and Ben Smith, Chair of LGBT+ Catholics in Westminster, placed a beautiful floral arrangement before the altar.  The Bishop then handed a lighted taper to Fr Dominic, who lit the candles.

The Farm Street Choir, under the direction of David Graham, provided a stunning accompaniment to these solemn rituals, the highlight of which was the Salve virgo florens set by Christopher Walker, specially commissioned for the dedication by former parish priest Fr Andrew Cameron Mowat SJ, who was among the seventeen concelebrants. 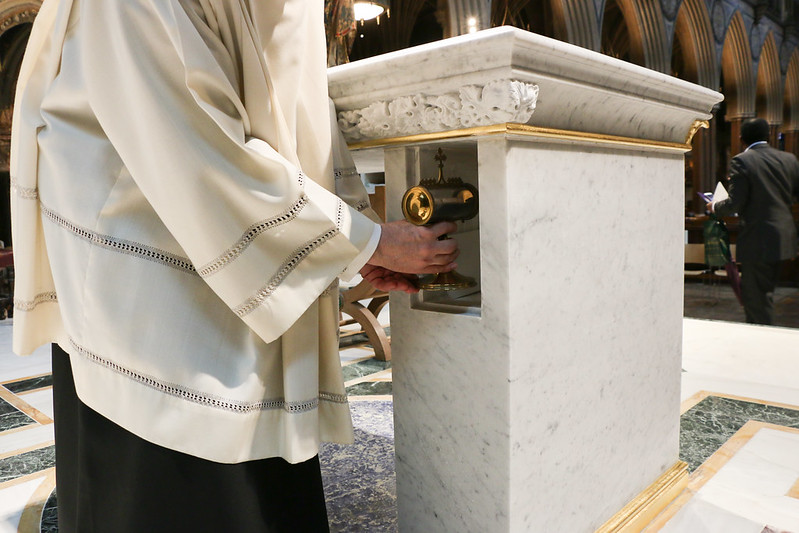 Photos from the day before and after the blessing, when the altar has been installed in the church and the crosses have been carved on its surface: 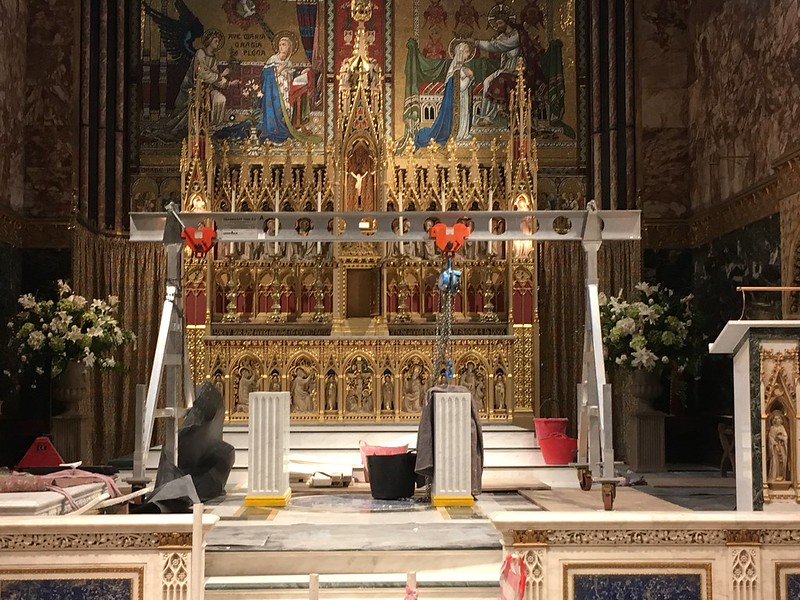