Debbie and Fr Denis in the new SFX memorial garden

The Feast of St Ignatius is always a joyful day in the Jesuit calendar.  Jesuits congratulated their many jubilarians at special masses for friends and alumni at Farm Street Church in London and at St Francis Xavier’s in Liverpool.  Staff in Jesuit ministries held services of thanks and praise, celebrated with special meals and sometimes even a half day’s holiday.

Twelve Jesuit priests and brothers were joined by a large congregation at St Francis Xavier’s Liverpool for the annual alumni and friends’ mass shared around our northern parishes.  The congregation included friends and alumni from Preston, Stonyhurst, Manchester and St Beuno's in North Wales.  The principal celebrant was SFX parish priest Fr Denis Blackledge SJ with music and choir provided by Maria Hall from Preston.

After the mass everyone repaired to the new memorial garden to “baptise” it as the venue for feast day refreshments which included a cake cut by Fr Denis and pastoral assistant Debbie Reynolds. Fr Denis explained “we've turned an area behind the Sodality Chapel from paradise lost into Eden re-found, and decorated with benches and shrubs. The idea is that folk who've lost loved ones will have brass plaques put on the benches in their memory.  It’s a good venue for a bit of a feast – like today’s barbecue, but it’s also a place for quiet prayer and contemplation.”

Br Ken Vance SJ, who has worked closely with all of the northern parishes and travelled down from Edinburgh, said “it was wonderful to catch up with so many old friends from across the region, SFX did us all proud with a beautiful venue and hospitality.”

Meanwhile at Farm St the annual mass for alumni of Jesuit schools around the world was celebrated by parish priest Fr Andrew Cameron-Mowat SJ with twelve concelebrants which included almost the entire Mount Street Jesuit community.   A packed church heard jubilarian Peter Edmonds SJ reflect on his 60 years as a biblical scholar during which he taught at the regional seminary in Harare and from 1984 at the newly founded Jesuit school of theology, Hekima College in Nairobi, where the students were mainly Jesuit scholastics from up to 22 African countries.  Many current bishops, priests and Jesuit leaders were among Fr Edmonds students, including the present Archbishop of Harare.

He concluded “we can recognise and thank God that the Ignatian vision and charism endures. On this feast day of St Ignatius, we are grateful for this. We thank God for his gift of Ignatius to the church and to ourselves, especially if, like many of those here, myself included, we have been exposed to this through a Jesuit education.”   Read the whole homily on our blog.

Following the mass the traditional Farm Street hospitality was offered and a chance to catch up.  Fr Dominic Robinson SJ, Superior of the Mount Street Jesuit community, congratulated Fr Edmonds on his double jubilee of 50 years in the priesthood and 60 years as a Jesuit, and a splendid celebration cake was distributed.

Please pray for all the Jubilarians of the Jesuits in Britain, and for vocations to the Society of Jesus

Celebrating 70 years in the Society

Celebrating 60 years in the Society

Celebrating 50 years in the priesthood

Celebrating 25 years in the priesthood 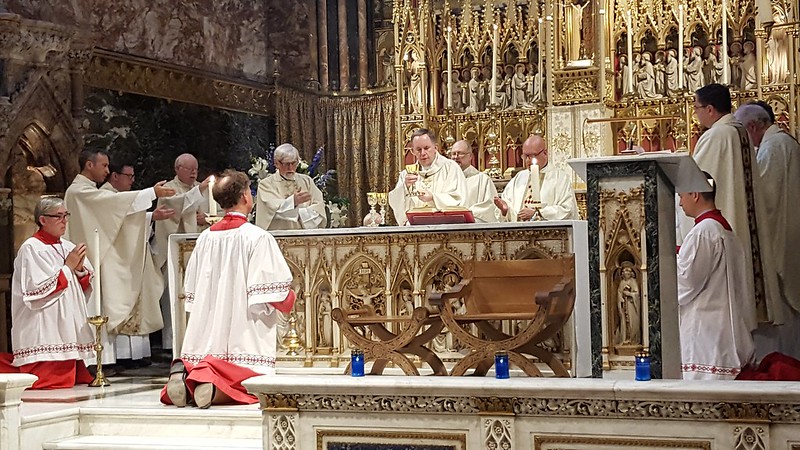