You could walk past the magnificent Holy Name Church on Manchester’s bustling Oxford Road and barely notice the vast scaffolding system erected over the north transept, set back, as it is, from the road.  Even once inside the church the high-level works are discretely cordoned off and have minimal impact on worshippers.

But the view from the top of the scaffolding down into the church roof is quite spectacular.

The gutters and downpipes of the north transept have not been replaced since the church was built in 1871, and parts of the roof in this area have badly deteriorated, meaning rain water has damaged interior walls and floors, and dry rot has taken hold in some of the roof beams. The long overdue restoration has been funded by the National Lottery Heritage Fund, enabling the work to start at the beginning of the year, with completion scheduled for June.  All the slate has been removed to enable restoration of the roof beams and vaulting, exposing the unique construction.

Designed by Joseph Hansom (of Hansom cab fame) the Grade 1 listed Jesuit Church of the Holy Name is a fine example of neo-gothic architecture and is very unusual in the lightness and delicacy of its construction.  The vaulted roof is formed of locally manufactured hexagonal terracotta pots which the church historian Nicholas Pevsner described thus:

“The interior is overwhelming in airiness, because all the piers are extremely slim so that space can flow freely… They are rib-vaulted, and indeed the whole church is rib-vaulted. Hansom achieved this by the ingenious device of using polygonal terracotta blocks instead of stone, thus lightening the weight considerably.”

Mark Pearce of architects Lloyd Evans Prichard, who has worked on restoration projects for the Holy Name over the last two decades, said, “This is a major project because of the great height of these roofs and the need to replace and enlarge the gutters and downpipes which seem to have been designed for much gentler weather than Manchester is accustomed to these days.  One pipe was completely blocked by a pigeon’s nest and it was almost impossible to get access to unblock it, so a lot of damage was caused.  We have also had to replace some rotten roof beams which gave us some structural challenges.”

Once the north transept is complete further restoration is required in the side chapels and ambulatory where there is more dry rot.  The Jesuits also hope to improve the current very basic church lighting and restore the tower and its bells.

Fr Brendan Callaghan SJ, Superior of the Manchester Jesuit community said, “We are very grateful to the National Lottery Heritage Fund for their generous support and their interest in the Holy Name. Once the church is fully restored it will be a priority to install proper lighting so that the true beauty of the extraordinary architecture and the fine decoration can be appreciated by worshippers and visitors alike.”

Not a tutu in sight

Fans of Manchester band The Smiths may recall a track from the 1986 album The Queen is Dead which begins:

The roof of the Manchester icon certainly looks as if the lead has been temporarily lifted. The priests at the Holy Name serve the Manchester Universities’ Catholic chaplaincy and are not likely to be donning tutus (though what the students get up to is another matter). 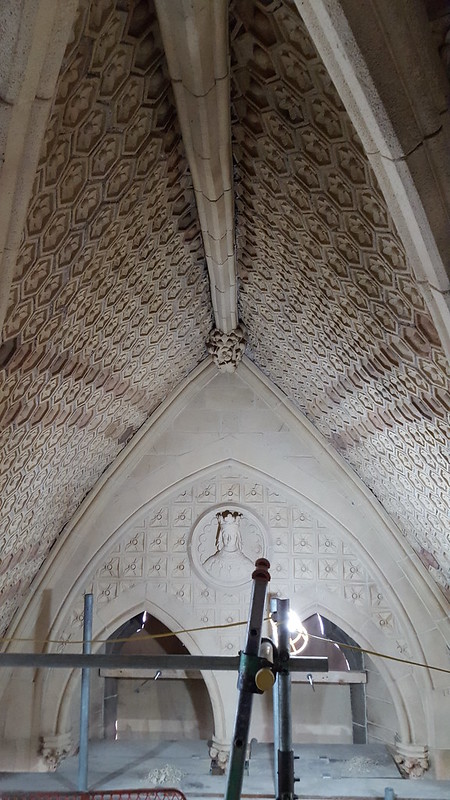