As Catholic communities in Rome, South America and around the world celebrated the canonisation of St Oscar Romero, martyred Archbishop of San Salvador, on Sunday, the Jesuits at the Sacred Heart parish in Edinburgh made their own special contribution to the commemoration and adoration of this “Saint for the Poor”.

A new shrine with the parish church, dedicated to the saint, was opened and blessed by parish priest Fr William Pearsall SJ at a beautiful service with music provided by the Sacred Heart music group playing violins, horns and guitars.

Fr Pearsall commented “the witness of St Oscar Romero continues to be an effective call to action against injustice, not only to Christians but more universally.” He pointed out that there is a Romero Street in Edinburgh, and sees this as a civic response of solidarity with those who have been abused by power and wealth.

The parish has teamed up with Caritas to initiate a project to promote the shrine with 16 sixth formers from local schools St Augustine’s and St Thomas of Aquin. The young people have each committed to spending 20 hours to promote the shrine in the local area, through their own and other schools, parishes, civil society and social media. “We are delighted with this collaboration” commented Fr William, “It will help spread the awareness of St Oscar Romero and his message which is still so relevant today.”

The shrine houses a relic of St Oscar Romero – a piece of the bloodstained alb he was wearing when he was assassinated while celebrating mass in March 1980. The relic was donated by Jan Graffius, curator of collections at Stonyhurst College, and a leading expert on relics. Jan has spent time in San Salvador with the sisters who care for the relics, offering her expertise in conservation.

Two new artworks are to be commissioned for the shrine, ahead of its solemn dedication on 24th March 2019, the feast of St Oscar Romero and the anniversary of his assassination. Archbishop Cushley will celebrate mass and unveil a newly commissioned painting by Peter Bridgeman, and a new silver reliquary.

Peter Bridgeman has already created a painting of St Oscar Romero celebrating mass with his friend the martyred Jesuit Fr Rutilio Grande SJ, which now hangs in St Ignatius Stamford Hill. Fr Pearsall has commissioned a different kind of portrait: “the formal portrait of the two martyrs celebrating mass is beautiful, but we thought to commission something which would express the mission of these two men moving among the marginalised people whose voice they became.”

“The shrine is now open for veneration and to promote the devotion to St Oscar Romero as a champion for the poor, and also to promote the cause for canonisation of Fr Rutilio Grande SJ, whose assassination in 1977 did so much to prompt St Romero to speak out against injustice.” 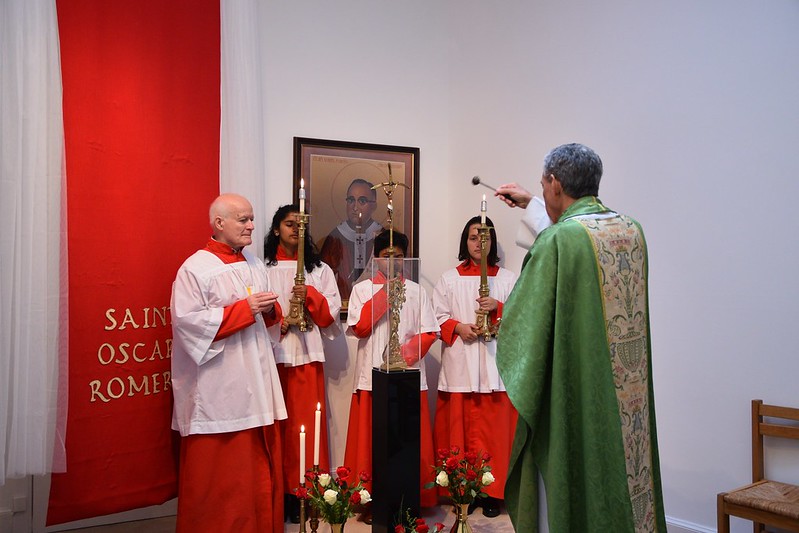