We congratulate the three Jesuit novices took their first vows at St Mary’s Church, Harborne, Birmingham on Saturday.  The novices have completed their two years in formation at the Novice House in Birmingham which looks after novices from the three Jesuit provinces of North West Europe - Britain, Ireland and Flanders-Netherlands.  Taking vows were two novices from Britain: Christopher Brolly and Stephen Noon, and Teodor Avram from Ireland.

Presiding at the mass was Fr Provincial Damian Howard.  Fr Bruce Bradley, representing the Provincial of Ireland, and Fr Walter Ceyssens, representing the Regional Superior of the European Low Countries concelebrated with Fr Simon Bishop, Fr Brendan Callaghan and Fr Kevin O’Rourke, who have all served as Novice Masters over the past two years.

In his Homily Fr Damian described how the noviciate prepares men for life as a Jesuit:

"What we do is to build up a man’s dreams about a life of love and selflessness, cramming his imagination with stories of Jesuits who were brave martyrs, intrepid explorers, brilliant scientists, accomplished artists and all sorts of other things. And then we place a broom in his hands and tell him to sweep the leaves in the drive. And, to add insult to injury, we tell him to him to find God in it."

Fr Damian reflected on the temptation to follow in the path of the past heroes of our shared Jesuit heritage, but reminded us of  the need to work in close partnership or true communion with others in order to fulfill our mission:

"the vows are really pathways to communion. I close my arms around no one person because I open to all. I live a simple life because I depend on the generosity of benefactors, because I’m accountable to my companions and want to be closer to the poor. And I’m obedient because sometimes others know me better than I know myself and see where I can do most good.

Teodor, Stephen and Christopher have all learned not to try to be heroes; you won’t catch them preening themselves, calculating their way to the next triumph, indifferent to the little ones who stand in their way. They know the real call is communion. They have become men who know how little they are and how little they can accomplish on their own. But they also know that together with God, gathered together by God, they can do anything."

After the mass the novitiate community hosted a party for the novices, their families, and friends and the many Jesuits from around North West Europe who had travelled to witness the occasion.

Please pray for Christopher, Stephen and Teodor as they begin Philosophy studies in France and Canada as Jesuit scholastics, and for the three new novices who have joined the novitiate this month to begin their Jesuit journey. 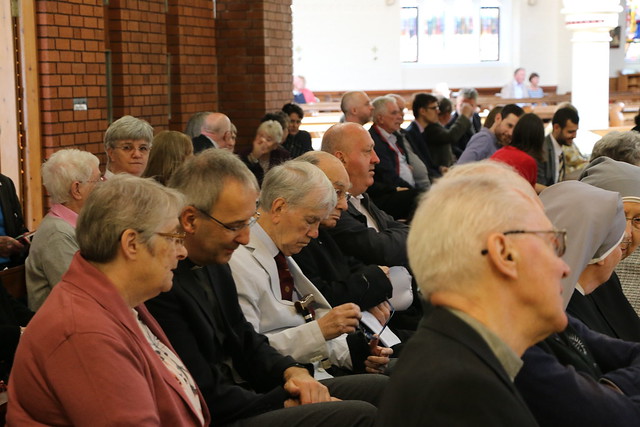